Flowers and Scenery of Mt. Kannon 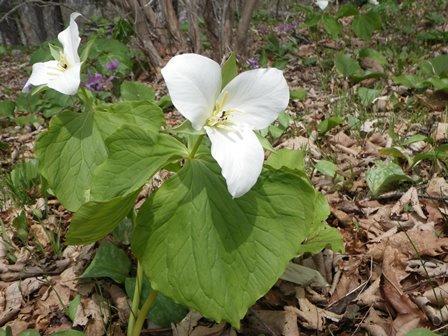 Here are some comments I have heard from visitors to the Mt. Apoi Geopark Visitor Center:

"This is the first time I've seen the information panels about the geopark routes and what's recommended for each season."

"This is the first time I've heard of Mt. Kannon; I'm going to go check it out! I think I'll buy some souvenirs on my way back."

"I went to see Ms. Uji's "Ainu, 100 in the Present" photo exhibit after I noticed a poster for it in Hotel Apoi Sanso and was very impressed by the exhibit! "

It's approximately 15 minutes by car from the foothills of Mt. Apoi to Mt. Kannon. Would you care for a spring-time tour of Samani?

Beautiful Mt. Apoi, the center of the Mt. Apoi UNESCO Global Geopark, is home to many alpine flowers that bloom nowhere else in the world. Due to climate change, however, the number of alpine plants is decreasing.

For the past 20 years, the Mt. Apoi Fanclub, a local organization of volunteers, has been working hard to protect the local flora and fauna. After the snow melted this year, the Fanclub began important maintenance to the climbing trail to protect the alpine plants from erosion and trampling. The Mt. Apoi Fanclub will continue its work according to its slogan, "to ensure that Apoi will always be Apoi." 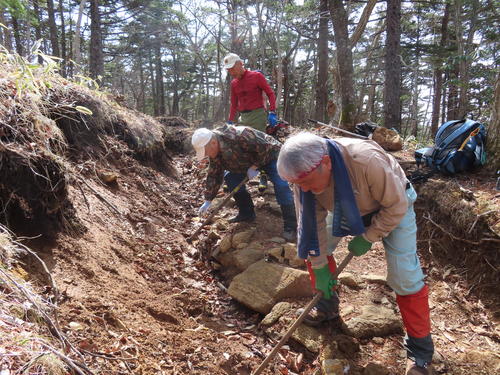 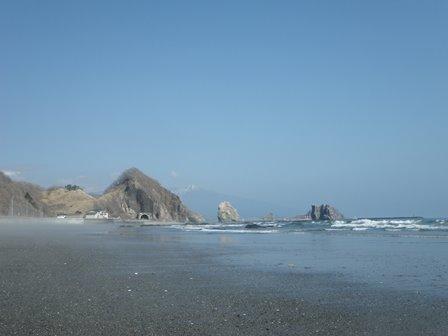 The view from Samani's Utoma district on April 5th, 2022. You can see a snow-capped Mt. Apoi in the distance, it's finally starting to look like spring.

The day after tomorrow is March 11th, the anniversary of the Great East Japan Earthquake. So I would like to write down what was covered during a "Hometown and Geo-study" lecture held on March 6, 2019.

Two monuments were erected in Erimo using donations from the 1933 Sanriku Earthquake and Tsunami. These monuments can be found in front of the Erimo Shrine and Shoya Police Station and convey the horror of the tsunami and earthquake to future generations. These two monuments are indicated by the "Natural Disaster Monument" map symbol on the when looking on the maps on the Geospatial Information Authority of Japan's website. There is a series of mountain peaks that form a long line between the Shintomi district of Samani to the Kamikineusu area of neighboring Urakawa, and several of these peaks reach 600 to 700 meters in height. These mountains were called Samatki, which in Ainu means to lie down. It's said that the bones of a whale lay on the top of this mountain. There is also a story from long ago that says a whale was once washed ashore by a tsunami, and there are many people who claim to have seen the whale bones (Mt. Apoi Geopark Guidebook).

Record of Samani Disasters and Regional Tsunamis: 4 Tsunamis along the Sanriku Coast

- Magnitude 8.2 earthquake occurred at 7:32 AM
- Tsunami struck the Sanriku coast 30 minutes later
- 22,000 people died from Miyagi prefecture to Hokkaido due to the earthquake and tsunami.
- No casualties in Samani from the tsunami, 6 died in Erimo due to collapsing homes (Kagami, 2006) 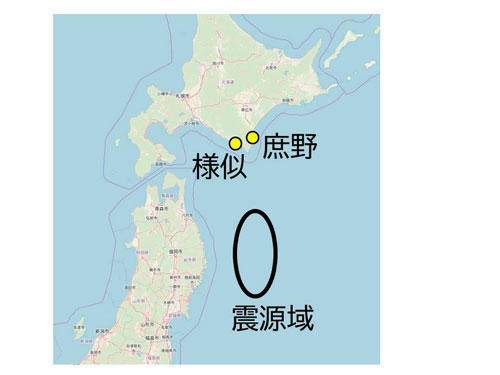 - 37 years after the 1896 Sanriku earthquake, a magnitude 8.1 occurred at 2:30 AM.
- The tsunami struck the coast 30-60 minutes after the earthquake,
- 1 dead in Urakawa and Samani and 12 in Erimo, caused by houses and fishing boats being washed away, flooding, and debris. (Nasu/Takahashi 1933)
- 10 dead in Minomura Village and 3 in Kogoshi Village (current Erimo) (Central Meteorological Observatory, 1933)
- Three tsunami waves struck in intervals of 30 minutes after the earthquake. The third wave was 14.2 m, and left 13 dead, 56 injured, and 90 collapsed homes and buildings. The damage was estimated at 340,000 JPY (current prices around 2 trillion JPY) (Erimo Town Folk Museum) 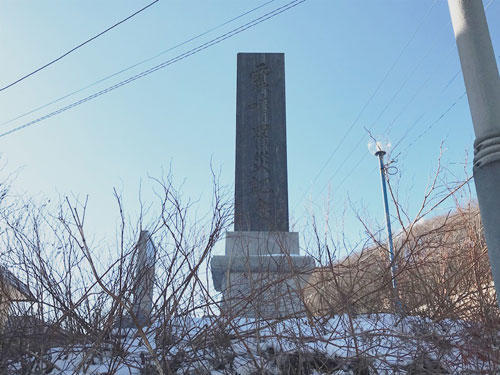 4. Damage caused by the Great East Japan Earthquake in 2011

The Great East Japan tsunami that occurred on March 11, 2011 was also caused by an earthquake whose epicenter was near the Japan Trench off Sanriku, in the Pacific Ocean. At that time, the seismic intensity that Samani experienced was recorded as a Shindo 4 on the Shindo Scale, which was not very large. Afterward, several tsunami waves exceeding 3 meters flooded Samani. Fortunately, there was no casualties or injuries, but the damage was estimated at over 700 million yen. Damage included flooded homes, sunk fishing boats, and damage to fish processing facilities.

It's important to know the historical records. I don't believe it's widely known that there were human casualties caused by past tsunamis in Samani and the surrounding towns. Also, please let us know if you have seen photographs that show old terrain (especially the coastline) and tsunami deposits of sand at the base of trees. Knowing the tsunami deposits will lead to understanding the records of past tsunamis.

Part of the junior high school curriculum focuses on the geopark and is titled, "Hometown and Apoi Studies." This year's studies have been conducted in the following steps:

Group research projects began on November 5th. The flora/fauna group and the geology group came by the Visitor Center. The other groups (tourism, industry, history, etc.) visited other areas around the geopark such as the Samani Industry Department, Board of Education, Tourism Information Center, the Oyaki shop, Hotel Apoi Sanso, Tojuin Temple, the Agricultural Cooperative, etc.

The flora group was shown around the Visitor Center exhibits by Mr. T, then visited Cape Enrumu to see the site of the Apoi Dream Project. The Apoi Dream Project is a nature restoration project where the students grow endemic Mt. Apoi alpine plants from seed, then transplant the seedlings back onto the mountain. 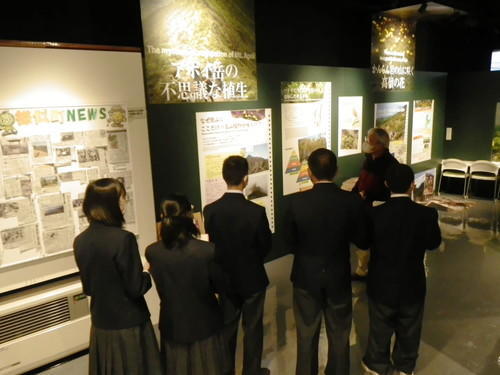 The geology group listened to a lecture at the Mt. Apoi Scientific Research and Support Center and visited the plate boundary site. They also learned about the different rocks and the National Park that includes part of Mt. Apoi Geopark. Academic advisor, Prof. N, talked about a project called "Rock Density & Mineral Hardness Experiment," and had the students conduct their own experiments to explore the diversity of the rocks for themselves. The students were surprised when they had to use arithmetic to calculate the rock density difference between peridotite and limestone, even though they were here to study geology! I was impressed when the students started connecting the dots between rocks and other things outside of earth sciences. Some of the students began to wonder out loud about how they would take the knowledge they gained from these experiments and turn it into their poster presentation. 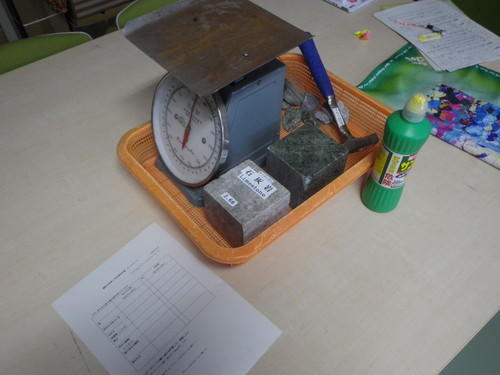 Due to the GIGA School Concept, all the students carried their own tablet and took many photos. They asked me a variety of questions while taking photos. I was rather impressed when the students began to answer each other's questions. Later they will summarize their group research project experiences to create a poster presentation. (K)